You can make Windows Search index your documents and Outlook data faster – here’s how.

Windows Search makes an index of all your files, documents and Outlook data.  It’s essential for quick searches, even within Outlook.   Until the index is complete you may get the dreaded “Search results may be incomplete because items are still being indexed” error.

Windows will fully reindex your computer for various reasons including some changes in index/search settings and if the index files become corrupt.  See Fixing Outlook index problems.

In this article we’ll explain how to speed up the indexing.  There’s step-by-step instructions plus some batch files if you’d like to automate the process.  It show the steps in Windows 10 but the same, or very similar applies to Windows 8 and 7.  In fact, this article is an update of a 2008 article on the same subject with the same registry entry.

Below are the step-by-step instructions then some batch files to let you automate the process.

Back in the early days of Windows Indexing there was an ‘Index now’ option to force indexing to take more computer resources and finish indexing faster.   Microsoft took that away in Windows Vista and has been willfully deaf to requests for its return.

There’s no button on the Control Panel | Indexing Options that can do it — there’s ‘Pause’ to make it stop but nothing to make it go faster.

Microsoft has provided a way to make indexing go faster – but it’s not easy.

In short you have to change a registry key called:

but before you rush off to do that there are some important steps before and after.

If you don’t know how to edit the Windows registry, this probably isn’t a tip for you. As with any registry changes, take care and make a registry backup before you begin.

and try modifying the registry value from 0 (the default) to 1 .
If you can, great, but chances are you’ll get this error:
Cannot Edit DisableBackoff: Error writing the value’s new contents.
if so, you’ll need step 2.

Type in the ‘Administrators’ group, click Check Names button to verify.  Click OK twice to return to the Permissions dialog.

Make sure the Administrators group has Full Control then click OK. 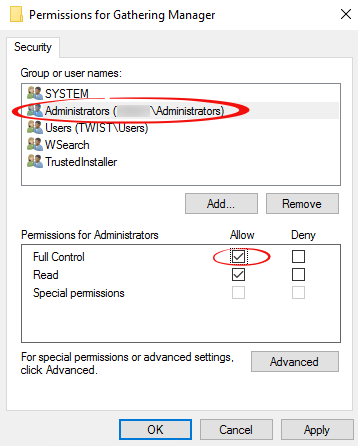 Now you should be able to edit the DisableBackOff key in step 1. If not, check the permissions and owner carefully. 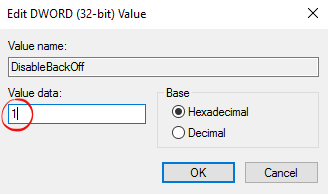 Go to Control Panel | Administrative Tools | Services, scroll down the list to Windows Search and restart the service.

The registry changes don’t take effect until the search services has restarted.

In response to readers questions … yes, this tip definitely works on at least Windows 10, 8 and 7.  If you can’t change the registry entry it will be a permissions issue.  Make sure you’re running Regedit as an Administrator and you’ve changed the ‘Gathering Manager’ Owner to the Administrators group.


The changed option doesn’t make indexing happen at a very high priority, just higher than usual. Even when the indexing status is showing ‘Indexing speed is reduced due to user activity’, indexing is still happening.

On our test machine indexing of 814,000 items took about 23 hours with the changed registry setting instead of running for many days and only indexing a third of the complete computer. It’s hardly speedy but better than nothing I suppose.

Of course, the higher priority indexing will make other work on your computer a bit slower, which brings us to the important final step.

Go back to the registry, change the DisableBackOff key back to 0 and restart the Windows Search service.  You don’t have to reverse the registry entry permissions unless you feel the need.

There are other tempting entries in the Windows Search part of the registry, well, tempting to nerds anyway. Resist that impulse with every fibre of your geeky frame. You don’t want to go messing with indexing unknowns.

Hopefully you won’t need faster indexing very often so the manual steps above are enough.  But if you’re having ongoing indexing issues, you might need to make the switch more often.

To help you do that, here are some batch files that will help you turn on/off faster indexing.

AT YOUR OWN RISK
This is for readers a little familiar with Windows and batch files. In these adversarial times we’re forced to remind everyone that these examples are provided for you to try at your own risk.

There are two .reg files to turn on/off the DisableBackoff setting

Note: the names of the .reg files are optional.  We chose Fast/Normal to make it clear what the setting will do.

Clicking on those .reg files will change the registry after a few on-screen warnings.  But you’ll still have to restart the Windows Search service, which bring us to the next step.

Adding some batch files will change the registry (with no prompts) and also restart the Windows Search service.

This batch file is almost the same except it uses a different .reg file.

This version combines the two batches plus a pause in-between to wait while indexing happens.

Echo Press any key when Indexing is complete
Pause

Here’s how a normal run of the batch file looks like.  The second NET STOP commands weren’t needed in this case.

Download a small package with all the above files ready for you to try.  The three Batch files plus the two .reg files.

Thanks for joining us! You'll get a welcome message in a few moments.
Office-Watch.com goes Secure Wrong Office installs cost $283k