The many faces of Microsoft Outlook

Once upon a time there was just one ‘Microsoft Outlook’ but these days there are at least six programs or services under the ‘Outlook’ name.  You’re totally excused for being confused because most people are, including many that work for Microsoft!

It’s important to know exactly which ‘Outlook’ you’re using because the support, help and tips are quite different for each.

Too often people talk of using ‘Outlook’ but that could mean Outlook the software (there are several types), the Outlook apps or Outlook.com the mail host.   All very different things.

We regularly get emails asking for help with ‘Outlook’ where the writer doesn’t understand the difference between the software or email service that use the same name.

Why all these different Outlook’s?

Misguided Microsoft marketing mavens, possibly over a long, liquid lunch, decided it would be a good idea to use the existing ‘Outlook’ name for all of Redmond’s consumer email services and programs.

The confusion that arises for customers and Microsoft’s own staff (especially in support) either didn’t occur to these decision makers or they just didn’t care.  Either way, Microsoft’s paying customers waste a lot of time and money figuring out which ‘Outlook’ applies.

Microsoft’s documentation gets similarly confused.  Redmond references to ‘Outlook’ usually mean ‘Outlook for Windows’ but it’s hard to be sure.

Microsoft should have known these troubles would happen.  If the company had a better corporate memory for mistakes it would remember the confusion between ‘Outlook for Windows’ and ‘Outlook Express’.  Two Windows email programs, both from Microsoft, but very different in behavior.

Just because it’s called ‘Outlook’ and comes from Microsoft doesn’t mean that help or support for one type of ‘Outlook’ applies to any other.

For some, the only real Outlook is ‘Outlook for Windows’.  Microsoft’s main email, calendar, contacts program.

If techy people talk about ‘Outlook’ they probably mean ‘Outlook for Windows’  – that’s Microsoft’s practice even in recent documentation.  With so many Outlook’s about we should all try to be specific.

We’ve already talked about the three programs that are called ‘Outlook 2016’.

Don’t get us started on the troubles caused by having two ‘Office 2016’ packages – Windows and Mac.  Again, Microsoft itself can refer to ‘Outlook 2016’ which probably means the Windows software but that’s not made clear.

The Mac equivalent of Outlook for Windows.  Like the rest of ‘Office for Mac’, it’s similar but different from the Windows version of Outlook.

These are the mail, calendar and contact apps from Microsoft now available for Apple and Android devices.

Microsoft bought an app called ‘Acompli’ and it was reborn as an ‘Outlook’ app.  Since its public release, Microsoft has poured a lot of effort and marketing into the Outlook app.  They prompt users into using the Outlook app, it’s even now in the account setup within Outlook 2016 for Windows.

Despite the name, it has no direct relation to either Outlook for Windows or Mac.

As regular Office-Watch.com readers know, we’re not fans of the Outlook app. As a single app, it’s harder to switch between Mail, Calendar and Contacts views.  That’s one reason why Apple and Android have separate apps for each of those functions and so does Microsoft in Windows 10 desktop and mobile!

The Outlook apps are a severe breach of your privacy.  To get mail and other information, the Outlook app gives your mail account login details to Microsoft’s servers which then collect mail for you.  Microsoft has copies of your mail login and any email etc. that’s sent to/from the Outlook app which is, in turn, available to Microsoft and any government which legally requests it.

(Outlook for Windows/Mac have always worked differently.  They directly connect to your mail host without Microsoft’s intervention).

Hotmail was Microsoft’s original free email hosting service.  It was purchased by Microsoft back in 1997 after Google’s Gmail threatened.

In 2013, it was renamed ‘Outlook.com’ or ‘Outlook Mail’ which has added even more confusion.  Less tech savvy people may talk about having ‘Outlook’ meaning they have an Outlook.com account – not Outlook software or app.

Almost all mail hosting services have a web browser interface.   Open your browser and go to gmail.com  yahoo.com or outlook.com among many.  For many people, it’s the only way they use email, instead of an email program like Outlook Windows/Mac.

The difference between a full email program and a web browser link to mail isn’t properly understood.  The web browser view is just another way to check your email.  You see the same email if you use Outlook for Windows/Mac or another email program/app.

Microsoft Office users normally use Outlook for Windows/Mac (because it’s part of the Office suite) and only use the web browser option as an alternative when necessary.

If you’re viewing email in any kind of web browser then it’s NOT an email program.  It’s a complex, personalized web page.

Go to http://outlook.com in your browser, login and you’ll see all the Outlook.com mail, calendar, contacts saved on Microsoft’s servers.

To add yet more confusion, the Outlook.com web page is labelled ‘Outlook Mail’.

OWA is another form of web browser access to your email, calendar etc.  Mostly it’s used as an alternative to let staff login to their emails from anywhere.

These days OWA has been renamed Outlook Web App – for no good reason except that everything has to be an app these days <sigh>.

Outlook Express was the email program that came with Windows 98 until Windows XP.

Anyone with a really good memory will recall its original name, ‘Internet Mail and News’. 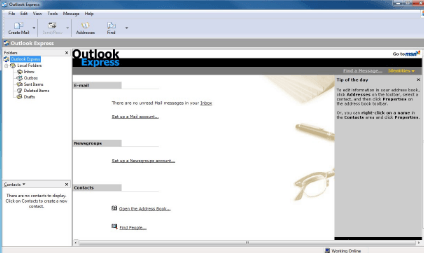 Many people wasted time over the years asking for ‘Outlook’ help not realizing that they needed to specify ‘Outlook Express’.

Waay back in the 20th Century there was ‘Outlook for MS-DOS’.  A simple program to connect with Exchange Server 5.5.  We mention it only for the sake of completeness.

« Oxford Comma costs $10 million but Word would not have helped. » Outlook apps have Shared Calendars