Get the Game of Thrones look in Word and PowerPoint

There’s a TV show just starting its last season, maybe you’ve heard of it <g>?  Here’s how to get the Game of Thrones look in Word documents and PowerPoint slides.

Plenty of people have borrowed the Game of Thrones or GoT look, including a certain US President.  All these uses are contrary to various trademarks by HBO.  Despite legal complaints there are many ‘tip of the hat’ to GoT.

Use some existing PowerPoint and Word features to make something that evokes the Game of Thrones theme.

Office-Watch.com has done this before.  Using common movies or TV show designs as inspirations for unique looks.  Formatting Magic with Word shows how to recreate the look of Star Wars and Thunderbirds plus blackboards or whiteboards.

What really ‘sells’ the Game of Thrones look is the font.  The font used in the main TV show titles is available for sale online or there are alternatives.

The font used in the TV Show is Trajan Pro by Carol Twombly & Robert Slimbach. and distributed by Adobe.

Natanael Gama has made two versions. Cinzel is nearest to GoT’s Trajan Pro but you might prefer the more ornate Cinzel Decorative.

For the TV show’s logo, go online and do an image search.

Or use the Game of Thrones font mentioned above.   Type  # for the logo complete with long T

This is another Trajan Pro like font with capitals letters in boxes.

There are three Trajanus Bricks fonts:  Regular, Inverse and Xtra.

Try combining the capital letter effects of Inverse and Xtra with the lower case of regular Trajanus Bricks. 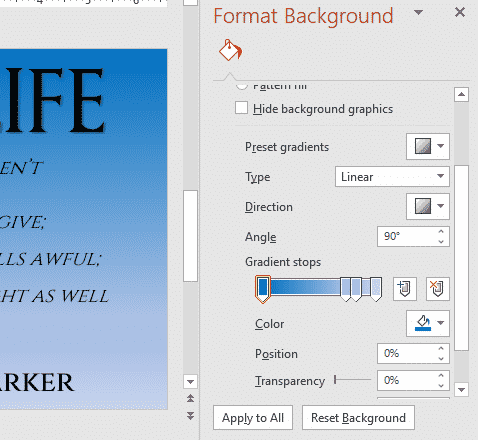 Add whatever images you like.  The new Office 365 picture transparency option lets you slightly fade an image so it blends with the text.  We did that in the first example above.

Law & Order titles and sound in Powerpoint And Office

Murphy Brown in Word or Powerpoint

Thanks for joining us! You'll get a welcome message in a few moments.
Overdue changes to Windows 10 available now Adding Captions in Word