Murphy Brown in Word or PowerPoint

Murphy Brown is back on TV, just another sign of the strange world in 2018.  An excuse for us to recreate the TV show’s look as a design inspiration for Word and PowerPoint.

You may not want to use the exact look of the Murphy Brown title card, but it’s a starting point for design variations of your own.  We’ll show how to make a similar look in PowerPoint then how to use that as inspiration for other variations in PowerPoint and Word.

Office-Watch.com has done this before.  Using common movies or TV show designs as inspirations for unique looks.  Formatting Magic with Word shows how to recreate the look of Star Wars and Thunderbirds plus blackboards or whiteboards.

We’ve spent a little time closely peering at a freeze frame image of the Murphy Brown title card.  Then did some work to come up with an equivalent in PowerPoint.

The PowerPoint slide a la Murphy

We’ll start with a PowerPoint slide, set to a black background obviously.  A Widescreen slide, the 13.33in x 7.5in dimensions will be important later.

Width: about 5pt looks right to us.

The line is about 75% of the way down the card/slide.  You can manually position it by dragging and checking the vertical ruler or do a quick calculation (75% of 7.5″ slide height) to set the vertical position to 5.25″

The line goes across about 85% of the horizontal slide or 11.33 inches on widescreen slide.  Horizontal positions in PowerPoint are measured from the top left corner so we need two settings:

Horizontal position:  2″  or the gap between the left of the slide and the start of red line

Here’s what we have so far:

The closest free match we could find for the title font is Libra Franklin Black Italic .

If you want to stick with Office supplied fonts, one of the ‘Franklin Gothic’ range is close.

Add a text box, type the words and set the color to White so you can see what you’re doing.

Position the text box so the first letter is aligned with the start of the red line.

Variations on a theme

Armed with a basic look, start making changes to suit yourself.

Obviously, the first thing to change is the text.

Change the text color.  The black background means you can use very light tints that would wash out on a white background. 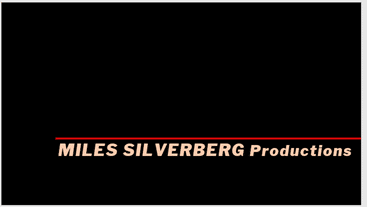 Change the background to another color or a gradient.

Over in Word, use the red line and matching font to evoke the spirit of the Murphy Brown title card.

This could be made into a Heading style.

For a more accurate version, use Insert | Shapes | Line and draw a line from the right-margin about 85% across the page.  Again, Red, 3pt width.

Alas, this can’t be made into a style.