Inserting Symbols is harder in Office for Mac

One of the many small, but annoying, limitations in Office for Mac is the Insert Symbol feature.

In Word for Windows it’s quite developed with a list of recently used characters: 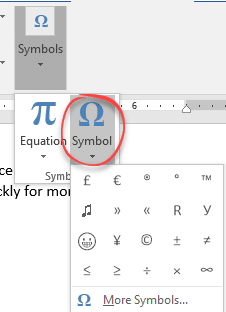 Or open up the main dialog to scroll through many more symbols or jump to exactly the one you want.

But Word 2016 for Mac is just a cursory effort that’s typical of Microsoft’s ‘just enough – but no more’ attitude to the Mac version of Office.

Here’s Insert | Advanced Symbol.  We assume the term ‘Advanced’ is used here sarcastically because there’s little ‘advanced’ about it.

As Office-Watch reader, Peter C. noted in an email to us

“I cannot seem to access symbols not visible in the panel, … has Microsoft intentionally restricted the range of non-keyboard characters and symbols available on the Mac version of Word?“

The Word for Mac dialog only shows the first 228 characters in a font!   That’s OK for an old-fashioned ASCII font but modern Unicode fonts can have over 100,000 characters! At least in Word for Windows you can scroll through the list.

Also missing is the important ‘subset’ pull-down list.  If Word for Mac supported the full range of characters, the subset feature would let you jump to a group of characters.

Even if you know the ASCII or Unicode number for the character, you can’t type it in as you can in Office for Windows.

The Keyboard Shortcut option is no help either, because it’s limited to making shortcuts from the symbols visible on the dialog.

The fix for Macintosh users is the same as in Office for Windows … look to the operating system.

In Office for Windows, use the Windows Character Map

The equivalent on the Mac is the expanded keyboard setting.  Go to Apple | System Preferences | Keyboard and check the option ‘Show Keyboard and Character viewers’.

Or Command + Control + Spacebar shortcut to open the Character Viewer.

Now the top toolbar has an extra icon.  Choose the Keyboard viewer or the Emoji & Symbols floating window.

Thanks for subscribing!
Public Domain images from 'The Met'. Try adding an .ics appointment into Outlook
View our latest eBooks!