Not all Word documents need the same tools. Some special documents are easier to make with tools added to the Quick Access Toolbar (QAT) just for the occasion.

Changing the Quick Access Toolbar has been around since Office 2007 but it’s less well-known that you can change it for certain types of documents.  The QAT can change to present the most appropriate buttons and menus for that document or type of document.  The toolbar for other documents remains unchanged.

Here’s the standard QAT that Microsoft provides in Word 2016 for Windows:

Here’s a custom example QAT for we’ve made for writing letters.  We’ve removed some Microsoft default buttons that don’t apply when writing letters and added more buttons and a menu which we use regularly.

We’ve added buttons that are useful when we write a letter, starting from the left after Save, Undo and Redo:

Reveal Formatting –  usually we don’t need this feature but letter formatting can get complicated so this is handy for figuring out what Word is doing to the page.

Style … – the ribbon Style Gallery is a PITA, mostly because it doesn’t show the style for the currently selected text.  Adding this menu item to the QAT solves that limitation in the ribbon.

Quick Print – a fast way to get the final page

View Whole Page – to see the overall look of the letter.

Some of these options are on various tabs of the default ribbon while others aren’t on any ribbon at all.  Either way, they’re now on the QAT for fast access or reference.

We’ve removed some buttons that don’t apply to us.  It reduces clutter and make more room for the buttons we want.

These buttons are only removed from the custom documents.  They’ll still appear in ‘blank’ documents or others based on the Normal template.

AutoSave is for documents saved to OneDrive or other cloud services, since we’re not saving these documents online the button can be removed.  In any event, the AutoSave switch has such a prominent place partly because Microsoft wants to promote cloud storage.

The Mouse/Touch button also doesn’t need to be there.  Again, this button is on the QAT in part because Microsoft wants to promote Word’s touch features.

How to make a custom QAT

Making a custom Quick Access Toolbar is fairly simple.  It’s much the same as changing the main QAT except you apply the changes to a specific document or template.

Open the QAT customization box from the pull-down to the right of the QAT: 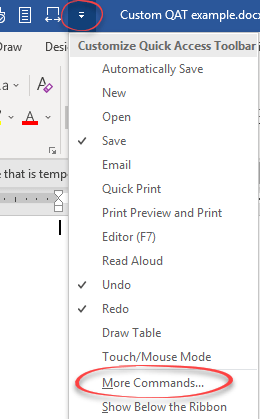 That opens the ‘Customize the Quick Access Toolbar’ dialog. Look at the top of the right-hand column, there’s a pull down list you might not have noticed before …

That pull-down lets you choose which QAT to change:

For all documents (default) – in other words, the normal.dotx template that all blank documents are based on.

Choose the For <current document> option then add whatever button you like.  Choose commands from the left side, click Add.

Removing default QAT buttons can’t be done from a document, you need to edit a template directly.

If you try to remove buttons from a document, you’re actually removing them from the normal template aka ‘For all documents (default)’.

It should be possible to remove default QAT buttons at the document level (and there probably is some geeky trick to do it). But there’s no direct way to do it from the Customize dialog.

What we’ve shown you is making a custom Quick Access toolbar within a document.

Do the same thing for all documents based on a custom template by opening and changing the custom .dotx or .dotm template directly.

Your specialized QAT will appear on all documents, new and old, based on that template.  With the bonus that you can remove any buttons that Microsoft added to the default QAT.

Quick Access Toolbar changes are saved in the document/template in the userCustomization/customUI.xml file within the document.  Here’s an example with some formatting and line breaks for readability.

« Inside the Schengen Visa Calculation worksheet » What happened to Office Mix?