Comma Ellipsis in Word and Office

Like it or loath it but the comma ellipsis has arrived ,,, as an alternative to the more common ellipsis with dots.  Here’s how to use it in Word and Office.

The comma ellipsis is a modern, more casual version.  It’s used as  a more dramatic, even annoyed trailing off of a thought, compared to the more neutral tone of the standard ellipsis.

No, it’s not ‘proper’ or formally accepted usage but language adapts over time and this is just one example.

There are alternatives and some consequences when you use comma ellipsis, especially in Word and Outlook emails.

Look at Word’s response if you use a comma ellipsis.

It’s not a spelling mistake, it’s a grammar error with the blue underline. Word thinks you mean a single comma to break up the sentence. 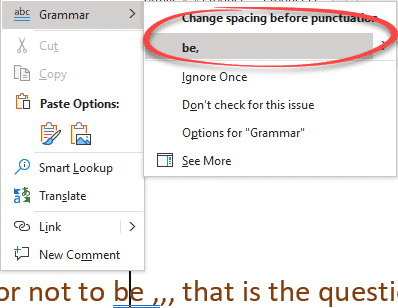 Ignore Once – will clear the blue underline for this text only.

Don’t check for this issue – isn’t a good choice in this example. Choosing that will stop Word from warning about real cases where the spacing before punctuation is wrong.

Word and Microsoft haven’t yet caught up with recent language changes.  That’s OK because who knows if the comma ellipsis will be accepted generally or be a passing fad, quickly forgotten.

However, it doesn’t make any difference.  Word doesn’t treat three commas as a spelling mistake.  Adding them to the custom dictionary doesn’t clear the grammar error either.

The most common comma ellipsis is simply three commas in a row.  Ellipsis experts know there’s more than one ellipsis, depending on the style guide.

Here’s how to do all three types with commas.

Three commas in a row

The non-breaking spaces (Ctrl+Shift+Space) ensure the commas don’t get wrapped between two lines.

With Show All on, the non-breaking spaces look like this.

This is the tricky one.  We’re not sure why someone would do this but we like a challenge.

The standard dot ellipsis is a single character in Unicode called a Horizontal Ellipsis.  Word inserts one automatically if you type three dots in a row or you type Ctrl + Alt + .

There’s no equivalent for comma ellipsis (it’s way too new) but can be faked.

Depending on who you ask, the standard ellipsis can be the same width as an en-dash or an em-dash. Here’s comma ellipsis in both widths with the two dashes for comparison.

Shrink or expand the width of the three commas from the Font dialog, click on the little arrow at bottom right of Home | Font.

On the Advanced tab change the Character Spacing | Spacing.

We found these settings worked with the Calibri font:

Other proportional fonts will need different settings, but those should be a good starting point.

If you use this character enough, make a Character Style or even an AutoCorrect to replace three commas with a formatted version.

Then again, you might rightly decide that the Comma Ellipsis is an abomination that should be, at the very least, ignored.  Or reviled as an offence against language and typography.

The choice is yours.

Thanks for joining us! You'll get a welcome message in a few moments.
Saving an Excel Chart as a Template Special Office and Emoji keys coming to a keyboard near you
View our latest eBooks!