The big weakness in Excel's Data from Picture

Excel Mobile’s Data from Picture has one big problem, it can’t figure out what’s intended to be in one cell and puts text in many cells.

Cell discernment is Data from Picture’s biggest weakness and the Review process makes it hard to fix those problems.

For example, text using Excel’s own Accounting format which puts the current symbol on the left of the cell and the number on the right.

Data from Picture puts the currency symbol in one cell, another cell for the blank space plus a third cell for the value. 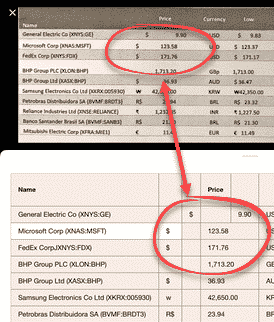 A horribly confused ‘Data from Picture’, making up to four cells when there should only be one.

Data from Picture usually considers that to be different cells so you end up with a mess of two or more columns instead of one.

Surely Microsoft’s much hyped ‘AI’ system can figure out that a currency symbol, space then numbers should be put together?  After all, Accounting is a default formatting option in Excel so the AI should be very familiar with it.

Cell splitting is a particular problem because the Review process can’t handle cell merge issues at all.

If you move away from nicely printed tables, originally made by Excel, the problem gets worse.

This bar menu from the wonderful Museum of Broken Relationships in Zagreb is converted into a single cell for each column. 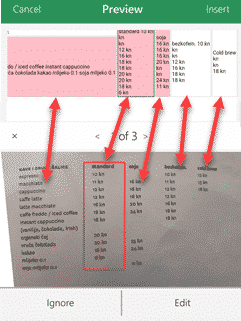 The workaround is to do what you can in the Review items then insert the Data from Picture table into a worksheet.

Home | Alignment | Merge Cells will bring multiple cells back to a single cell.

Excel Data from Picture, making it work in the real world

Excel gets Insert data from Picture

Excel image to worksheet comes to iPhone and iPad

Thanks for joining us! You'll get a welcome message in a few moments.
Excel image to worksheet comes to iPhone and iPad Get Microsoft Office ready for Catalina, the next macOS