Care of ℅ symbol in Word, Excel, PowerPoint and Outlook

The Care of ℅  symbol can be typed into Microsoft Word, Excel, PowerPoint or Outlook.  Both in Office for Windows and Office for Mac.

Care of ℅  symbol is one of those useful symbols you’ll never see on a keyboard and have to go hunting for.  ℅ is used on envelopes and addresses, it refers to an intermediary responsible for transferring a piece of mail between the postal system and the final addressee. For example:

How Care of ℅ looks in different fonts.

Here’s some examples of how Care of ℅ looks in common Office fonts.

(web codes aren’t used in Microsoft Office, we’ve included them for the sake of completeness.)

The Care of ℅  sign does NOT have an inbuilt shortcut in Word.

Once in a document you can copy it to AutoCorrect and make your own shortcut.

Insert | Symbols | Symbol and look for the  Care of symbol.

In Windows there are several shortcuts to enter the Care of ℅  character into any program, but they use a numeric keypad, not the number row above the letters.

The Windows Character Map accessory in all Windows releases 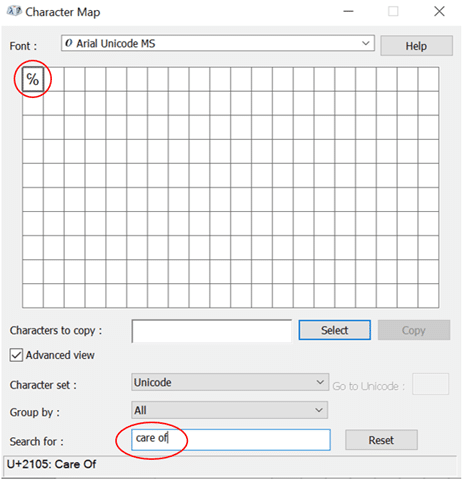 Character Map has a search feature, something missing from the Insert | Symbol in Office.

On a Mac, Command + Control + Spacebar shortcut to open the Character Viewer.   Search for “ Care of “ and the Viewer should find the symbol you need. Despite the name Character Viewer, the Apple system tool will also insert characters into any program, including Office for Mac. 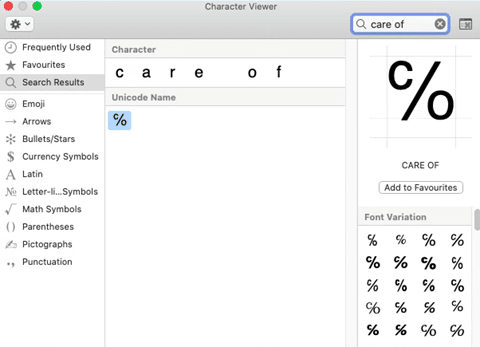 Thanks for joining us! You'll get a welcome message in a few moments.
More Rounded Corner tricks for Office Recovering lost Word for Mac documents