Get Microsoft Office for no money, nil, ziltch, nada, bugger all. It’s legal, easy and this article explains the many options available.

We’ve not talking about ‘Office wannabes’ but Word, Excel, PowerPoint or OneNote from Microsoft itself. They won’t have all the features of Office 2016 for Windows desktop. There’s usually enough for most purposes and better than nothing at all.

Use these Office options on spare or extra computers.  Or perhaps on a temporary or loaner machines.  They are useful to keep in mind for unusual or unexpected situations.

Office Online is Word, Excel, PowerPoint or OneNote working in a web browser.

All you need is a supported web browser and an Internet connection.

Broadly speaking, the most recent release of Firefox or Chrome is enough. Microsoft’s Internet Explorer 11 or Edge.  Safari on a Mac.   See the Microsoft page for details, but most desktop/laptop computers will run Office Online without changing anything.

A free Microsoft account is necessary but not a paid Office 365 plan.

Go to https://office.com and login to your Microsoft account (or make one). 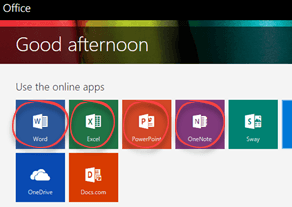 Look for the ‘Use the online apps’ icons for Word, Excel, PowerPoint or OneNote.  Or click the OneDrive icon to see documents already saved there.

Documents have to be saved on either OneDrive or Dropbox.

Editing documents on your computer

Office Online can’t directly edit a document, worksheet or presentation on the computer.

Existing documents on a computer can be uploaded for editing.  If you wish, after editing the document can be downloaded to the computer and deleted from cloud storage.

Anyone who has use Microsoft Office in the last decade will be familiar with Office Online.  It has the same tab/ribbon interface.

Not all the features of Office for Windows/Mac are available, but there should be more than enough for most documents.

If you’re using Window 8, 8.1 or Windows 10 you have two free Microsoft Office options.

There are the Office Online programs in the browser of your choice (see above) or the free Windows apps.  These apps have had many names over the years, Metro, Modern, UWP (Universal Windows Platform) or whatever name Microsoft has chosen this month.  Whatever they’re called, you get then from the Windows Store app.

We always install these apps on Windows 8/10 computers even if Office desktop is already on the same computer.  The apps serve as a emergency backup if the desktop programs stop working properly.

The current Office Mobile apps are free on smaller tablets and smartphones.  The difference is the screen size.

Screen sizes 10.1 inches and below can use the apps free.

Screen sizes above 10.1″ need an Office 365 subscription to make or edit documents.
Using the apps doesn’t count against the install limit on your Office 365 plan (one for Personal or five for Home).  To some extent they do let you use Office for ‘free’ on extra computers.

At the moment, the apps are called ‘… Mobile’.  Finding them in the Windows Store is surprisingly difficult.  Search for ‘Excel’ and you get all manner of non-Microsoft apps.

Instead, use these web links which should redirect Windows 8/10 users to the Windows Store app.

Make sure you’re getting the Microsoft app and not some third-party program.

Got an older version of Microsoft Office for Windows?  Maybe that’s all you need.  Have a dig around that pile of old software and maybe you have the disk and product key.

Office 2007 or later should install and work on Windows 8 or 10.  Microsoft’s official compatibility listing is biased towards getting people to upgrade so mentions of reduced or partial compatibility can refer to problems with relatively minor features.

The important thing you need is the Product Key.  That’s the 25 character code which unlocked the installation. It came in various forms over the years, as a sticker on the retail box or on the computer/laptop itself.

If you have a product key but no disk, all is not lost.  The Product Key is unique but the installation files aren’t.  Perhaps you can borrow a CD/DVD and copy the contents?

There are some downloadable installation packages for older Office versions but be VERY careful about possible virus contamination.

Another possibility is to use a remote access tool from one computer/device to controls another computer which has Microsoft Office installed.

This was a common trick back when people wanted to use full Outlook for Windows on other computers.

One trick is to leave your home/office computer running and control it from a laptop or other computer (in an Internet café or friends house).  The host computer is often more powerful and has software installed that’s not available on a laptop or device.

Remote access works best between ‘full’ computers like a desktop/portable Windows or Mac.  It’s possible from tablets or even smartphones but the lack of a keyboard and smaller screen make it clumsy.

However, RDC is difficult to setup across the Internet.  It’s best within a local network.

To remotely view/control a computer across the Internet is easier with a dedicated tool.  These tools work through firewalls and modems to link computers across the globe.

Peter has used TeamViewer for many years. It’s available free for personal use.

There are other remote control services available … but today’s topic includes the magic word ‘Free’.  We’ve never had the need to use a paid service when there are in-built or free options available.

Thanks for joining us! You'll get a welcome message in a few moments.
Unique image source for your PowerPoint or Word documents How does Office handle the last word?