Microsoft Word can check for the Oxford Comma in your lists and it now uses that name in Word 2016 for Windows or Mac.  Sadly, Word 2016’s options have been degraded from earlier versions.

Word 2016 can only warn you if the Oxford Comma is NOT there … good for people who prefer the ‘Comma required before last item’.

But if you don’t like the Oxford Comma, Word 2016 has removed the option to warn when the’ extra’ comma is inserted.

Oxford Comma option is OFF by default.

The default setting is ” Don’t check ” or unchecked which is why most people don’t even realize Word can check for Oxford/serial commas.

In Word 2016 (Windows/Mac) for Office 365 subscribers, click on Writing Style settings and scroll down  to ‘Punctuation Conventions’ (Windows) the very bottom of the options list (Mac). 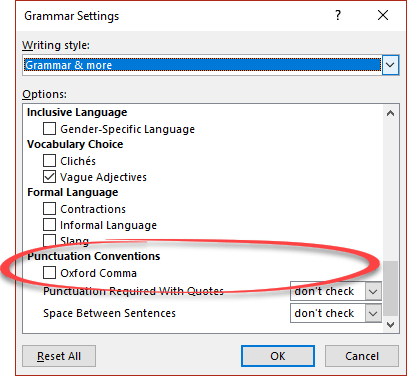 In the Office 365 subscribers Word 2016, the name ‘Oxford Comma’ is used for the first time.  It’s a simple on/off  to test for the Oxford Comma and warn if it’s not there.

None of the choices available in Word 2013 or earlier.

This is a downgrading of the Oxford Comma checking from earlier versions of Word which had more nuanced options.

The same feature in Word 2016 for perpetual licence and earlier versions of Word is called ‘Comma required before last list item’ and has better choices.

The default setting is ” Don’t check “.

Never: Oxford/Serial comma NOT required. Warn if there IS an extra comma

Do NOT want the Oxford Comma – Never

The Oxford Comma is called the ‘Comma required before last item’ by Word 2013 and previous version.  It’s also known as the serial comma, series comma or Harvard comma.

Truth, Justice and the American Way

OR the Oxford comma version …

Truth, Justice, and the American Way

Wikipedia has some good examples of where the ‘extra’ comma makes the meaning clear. For example “To my parents, Ayn Rand and God. ” could imply that the parents’ names are Ayn Rand and the Almighty. Adding a comma can eliminate that (unlikely) possibility.

Thanks for subscribing!
Yet another color selector Grammar checking returns to Office 2016 for Windows
View our latest eBooks!