A judgement from the US Court of Appeals turned on the Word Count feature in Microsoft Word and how it differs from the rules for court submissions.

Most courts have rules about the length of submission which, in this case, were accidently exceeded. The plaintiff is representing himself (‘pro se’) so the judge was more lenient than if a professional had done this.

Many types of documents have word count limits which may, or may not, match what Microsoft Word includes in its word count.

Word has two-word counts.  A brief summary in the document properties pane, these days at File | Info | Properties. 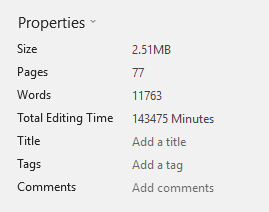 It’s a summary which doesn’t indicate what’s in or out of the word count.

Microsoft Word’s Word Count feature by default does NOT include footnotes, endnotes or textboxes.

In modern Word (Windows or Mac), click on the word count in the bottom Status Bar to see the details.

The option to include/exclude footnotes etc. is clearly there on the dialog box.  Checking that box changes the word count in that box and on the Info | Properties pane.

We respectfully disagree with the judge when he said ‘ The program’s “Word Count” panel includes footnotes, which the “Properties” panel omits.’  (page 2 of the judgement)

The word total is the same in both places (Info pane and Word Count dialog), what’s included depends on the ‘Include textboxes, footnotes and endnotes’ setting in the full Word Count dialog box/panel. It’s the same behavior in the latest Word 365 for Windows and back to Microsoft Word 2010.

Word Count is not law

Microsoft doesn’t get to decide what’s included in a word count, judges do.

Certain parts of a submission might not be included in a word count.  In this case Rule 32(f) excludes these items from the word count accepted by the court.

The judge’s recommendation is to start with the Microsoft’s Word Count (with footnotes included) then subtract anything that the rules let you exclude from the count.

Word lets you do that.  Select any block of text (e.g a table of contents, cover page etc) and look on the status bar.  It now shows the word count of the selection.

Subtract those partial word counts from the total to see if you’re under the word limit.

Thanks for subscribing!
Monthly and Yearly Date Arithmetic with Edate() in Excel Microsoft Word vs Scrabble Champions
View our latest eBooks!