Does a document name reveal your secrets?

A US government department has accidentally revealed a secret by overlooking the obvious in Office document security.  Office helps you scrub documents of private or secret information before sending. It’s easy to overlook the obvious data leaks that ‘Inspect Document’ doesn’t cover.

‘Inspect Document’ checks for hidden information in the document that you might not want seen by others.  Edits, comments, document properties etc. 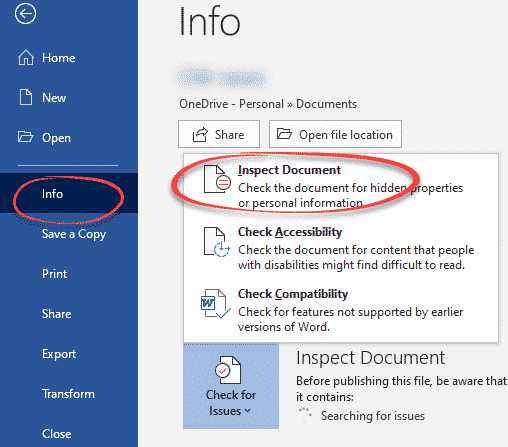 Inspect Document does NOT check the file name of the document.

A story about the data leak of traveler information via a contractor for the US Customs and Border Patrol (CBP) has a little cautionary tale hidden in the detail.

The CBP would not say which contractor had leaked the confidential info but still managed to give away the secret. Their media release was a Word document, with the name of the company right there in the file name. As reported in the Washington Post:

Our thanks to Geoffrey Fowler at the Washington Post for confirming that the ‘title’, in this case, was the document file name.

The moral of the story …

It’s too easy to rely on the technology and forget to check the bleedingly obvious.

Why you must use the Document Inspector

Changing the Author name in an Office document

Thanks for subscribing!
OneDrive Personal Vault what it is and is NOT Windows 10 Registry %@$-up by Microsoft is no accident
View our latest eBooks!