Solved – the problem with Excel Tables and Transpose

There are several ways for an Excel table to be transposed (rows and columns) but none of the online suggestions work very well with tables.  We’ve found a solution which transposes one table into a ‘swapped’ table i.e headers become column A and column A becomes the headers.

Along the way we’ll explain a clever use of Power Query, how to run VBA code when certain cells are changed and how to refresh all or a single query from VBA.  If you’ve not used PowerQuery, this is a simple, useful and self-contained starter.

This is what we’re trying to do. At top is a list of exam results from the town of Bedrock and a page right out of history. 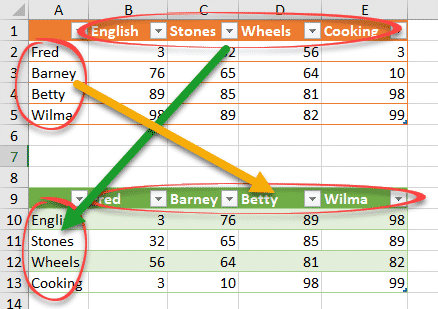 The bottom table is transposed so we can filter / sort by students instead of subjects.

What’s needed is a way to take a source table and make a transposed version which is also a table AND updates whenever the source changes. There are many times this kind of transposed table is useful yet it’s not truly and properly supported even in modern Excel.

Microsoft, among many, offers two Transpose methods, neither are truly what’s needed.

is OK but is a ‘once-only’ action not suitable for changing source data. And it doesn’t work for whole tables.

The Transpose() function would seem ideal because it works from a source Excel table.

BUT, the result isn’t an Excel table and can’t be converted into a table (because Transpose() returns a dynamic array).

The trick is to use Power Query which has its own Transpose function which, with a little tweak, will do what we need AND drop a full Excel table back into the worksheet.

Sadly the updating from changed source data isn’t automatic but there’s a VBA fix for that if you need real-time updating.

Select the source table then Data | Get & Transform Data | from Table

That imports the current table into the Power Query editor.

Power Query has a Transform | Transpose option but it will remove the existing headers (not move them to rows).  Before Transposing, convert the headers into a normal table row (this is the ‘little tweak’ we mentioned.

Now the table headings are in row 1.

Choose Transform | Transpose to swap the rows and columns.

Finally use Transform | Use First Row as Headers to make the new top row into headers.

One of the many great things about Power Query is that it’s all recorded as a series of steps that are repeated each time the data is refreshed.

Close and Load the query into your worksheet.  By default, the new transposed table is dropped into a new sheet.  We moved it to the same sheet as the original table.

Two tables, the original (top) and the transposed (bottom) each with its own table filters and other Excel table goodies.

Make sure you only edit the original/source table.  Any changes to the second table will be overwritten when the data is next refreshed.

Delinking the tables for fixed data

If your source data is fixed (like exam results) then you can just delete the query. Its transpose trickery won’t be needed again.  Right-click on the query in the Queries and Connections pane then Delete.

The second transposed table will remain but delinked from the original table.

Updating the query and table

Let’s suppose the original table has values that will change over time. Maybe Fred & Barney will complain that their wives did better?

There are a few options for updating the transposed table after the original table changes.  Which one you choose depends on the situation.

Each query has some update options, right-click on a query then Properties | Usage.

Refresh every … minutes might be enough but it still means the two tables could be out of sync.

Refresh data when opening the file should be ON.

Refresh this connection on Refresh All should be ON.

None of these are good options because there will always be a time delay between changing the original table and the transposed table updated.

The better fix is to force a query update whenever a cell in the source table is changed.  For that we turn to VBA and one of its event handlers.

Excel VBA has an automatic trigger or event when there’s a change in a worksheet: Worksheet_Change(ByVal Target As Range) in that function you can add code to only work when certain cells in the worksheet are changed.   The basic function looks like this:

What we want to do is refresh the query which is simply this line:

That’s the VBA equivalent of pressing Data | Refresh All.

Update a single query in VBA

Most workbooks will stick with RefreshAll but if there are a lot of queries in the workbook you might not want to refresh them all, to update a single query use:

NOTE: the query name is NOT the name that appears in PowerQuery and the Power Query editor, for VBA it must be prefixed with ‘Query – ‘.  For example this query ‘ExamResults-transposed’

In VBA is called ‘Query – ExamResults-transposed’ as in:

No, we don’t understand it either, but that’s what works!

The Worksheet_change function goes in the VBA for the sheet with the original / source table.

As a final little tweak the Range() is now the name of the source table, not a fixed cell reference.  That lets the code work if the table is resized.