There are official and unofficial biohazard symbols available for Word docs, PowerPoint slides or any other place you need them. We have download links to better graphics you can use with variations to make them stand out

The official biohazard symbol was developed in 1966 and there are many variations available.  The widely used symbol is available in some fonts, Wikipedia and in Office. Though some of those choices have limitations that we’ll explain and workaround.

These three versions are from different places:

The Biohazard character is in the Unicode specification – code U+2623 .  Like many symbols, most fonts don’t include it.

For Windows/Mac/Office the ‘Arial Unicode MS’ font has the symbol. 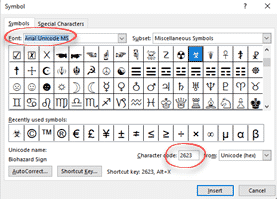 Font symbols can be a problem, especially in larger sizes. Positioning the symbol as text can be difficult because a large symbol comes with much bigger spacing before and after.

Wikipedia is, as usual, a good source of SVG graphics.  SVG’s are supported in Office 365 and Office 2019, with many options to edit, recolor and resize not available to PNG, JPG or other common image formats. Biohazard.svg linked from the main Wikipedia page:

Download as an SVG (preferable if you have Office 365/2019) or one of the PNG versions.  Right-click on a download link and choose ‘Save link as …’ or equivalent in your browser.

Office 365/2019 Icons are SVG graphics and include a version of the biohazard symbol. Find it at Insert | Illustrations | Icons then search for ‘biohazard’ or just ‘bio’.

Frankly the Microsoft version is not very good or useful.  The symbol is surrounded by a rounded triangle. A ‘symbol only’ version would be better, and it’s what Microsoft did for other icons like recycling (see above).  Stand-alone symbols let people use it in any context they like and gives a lot more flexibility.

To be fair, when the biohazard icon was added to Office, who knew it would become so globally relevant <sigh>.

The right-hand example shows one of the limitations of the Biohazard icon in Office. The Graphics Outline can be changed varying thickness or color but the same settings apply to all borders, outside and inside the icon.

Where to find a flexible biohazard symbol only?  Wikipedia has it, just not linked from the main page on the topic. Biohazard symbol as SVG and other formats.

Now we’re in business.  Download the SVG or PNG file, from there you can resize, recolor and include it with other images, maybe like this …

That might not seem like a big deal, but see what’s possible now the three elements (shape, border and symbol) are separate and can be changed.

Inserting Symbols is harder in Office for Mac

Use the latest Unicode symbols in Office

Make a transparent shape to mask a photo in Word, PowerPoint and more

Office for iPhone/iPad gets Icons or SVG graphics

Thanks for joining us! You'll get a welcome message in a few moments.
Stop copying of your signature as a picture Download a Warning Triangle in Word and PowerPoint