Apparently nothing can escape the touch of US politics*.  Even Microsoft Word and PowerPoint got dragged into the latest Democratic Primary debate.

It all started with Elizabeth Warren describing Pete Buttigieg’s health plan as ‘just a PowerPoint’. 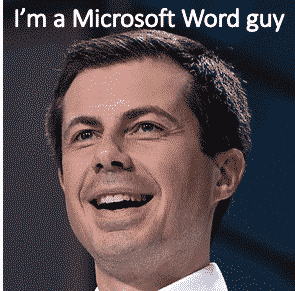 Buttigieg responded with the ad-lib that “I’m more of a Microsoft Word guy.”  Which isn’t bad as an ad-lib under pressure, even though it doesn’t mean much.

Maybe Mayor Buttigieg likes Word because Microsoft has already put his surname into the software dictionary?

We have to agree with Makena Kelly over at The Verge that Elizabeth Warren is certainly an Excel lady.  Surely the Senator is a dab-hand at spreadsheets, unlike many other politicians for whom Excel and computers generally probably seem like black magic.

* We hope this is the last time Office-Watch.com has to write about the 2020 Presidential race!

Coronavirus, Buttigieg and other topical words in Word & Office

Word, Calibri font and the possible downfall of a government