Find out what you need to use Microsoft Teams

Microsoft Teams is primarily a cloud and web-based service with software or apps available for the main platforms.

Teams features appear to be introduced first to the browser based Teams then added to apps later on.

We’ve had considerable trouble with the Teams apps during testing.  Perhaps that because of limitations in the free Teams plan?   Amazingly, the Windows 10 Teams app won’t start at all on any machine we’ve tried. The Teams Android app won’t let us get past selecting an organization.  Only the Ipad Teams app works properly for us.

As they say “Your mileage may vary” but we suggest you start in your browser then try the apps later.

You’ll need a Microsoft Account to login to Teams.  That should not be a problem because Office 365 users will already have one.

If someone invites you into a Team, make sure they use an email address you have linked to a Microsoft Account.  If not, you’ll have to make another MS account which is a pain.

The browser is the best place to start with Teams. It has the most features and best help. 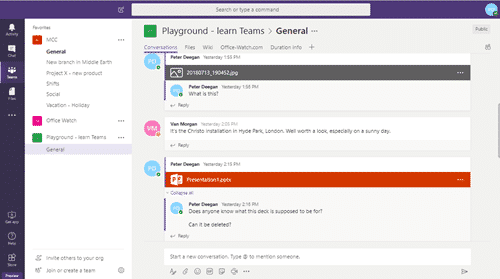 In short, almost any modern browser will work with Microsoft Teams

The main omission from this list is Safari.  You’ll have to use another browser or Teams app on Macs, iPad or iPhone.

There are both Windows and Mac desktop programs for Teams available from https://teams.microsoft.com/downloads

The Mac client is a PKG file to install with administrative rights.

All the major mobile devices are supported for their recent versions:

« Why bother with Microsoft Teams? » Office for Android updates for July 2018