How long do you have to work to afford Microsoft Office?  That’s the question we asked after compiling a list of Office 365 prices across the globe, Office 365 Home and Office 365 Personal.

We’ve found some median income stats for 33 major countries and matched them to the local prices of Office 365 Home.   The results are interesting though, we hasten to add, for illustrative purposes only.  There are various grey areas in the calculations and data that we detail in the remarks below the table.  Those issues don’t severely affect the overall results but would trouble any statistical experts.

Most of the poor affordability locations are Euro zone countries with lower median income.

The exception outside the Euro zone is Mexico which is, surprisingly, another poor affordability country.  Perhaps Microsoft has raised the Mexican price to discourage US customers from buying from ‘south of the border’?

Canada, Australia, Norway and Sweden are the most affordable places to buy Office 365 Home.  They share relatively high incomes but lower Office 365 prices.

Luxembourg, with the highest median income in the Euro zone, is the most affordable European country.

After rounding you can add the United States to the countries where it takes less than a day to pay for Office 365 Home.

And that’s before you take into account the lower street prices available in these good affordability countries!

Microsoft has a single fixed Euro zone price (EUR €99), regardless of different affordability in each Euro country.   That makes for a wide affordability gap.

It takes more than five times longer to buy Office 365 Home in Latvia than it does in Luxembourg. 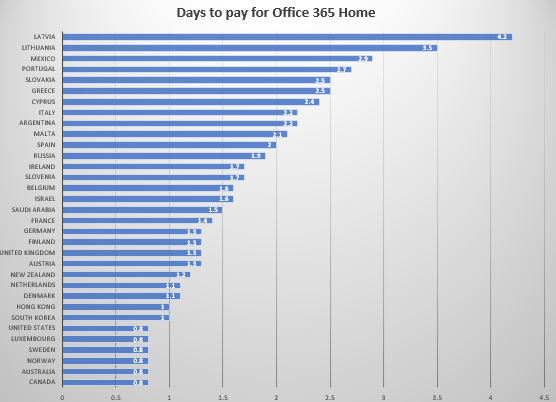 The original version of this article was horribly wrong, again our apologies.  We’re very obliged to Tim Boreham who brought us back to the path of statistical and mathematical righteousness.  Any remaining ‘bludners’ are entirely our own.

Thanks for joining us! You'll get a welcome message in a few moments.
Hidden Numbering options in Word What happened to Flash Fill in Excel?
View our latest eBooks!