Secrets left in docs after Document Inspector in Office

Office’s Inspect Document is supposed to remove or scrub information being accidentally included in Word, Excel or PowerPoint files.  It’s not perfect and misses out on some critical hidden information that can giveaway secrets.  Details in images, layers and even highlighting.

Document Inspector is at File | Info in Office for Windows.

The feature was added after Office customers discovered that embarrassing info was being included in documents sent outside the organization.  For example, revisions in a contract can show the in-house debate on prices or terms to the other side of a negotiation.

Inspect Document isn’t bad, but it can give people a false sense of security. The feature is promoted as a way to ‘privatize’ a document, workbook or presentation.

There are some things overlooked by Inspect Document that we’ve detailed below.  There may be others, if you can think of one, let us know.

Some of the lapses in Inspect Document could be fixed by Microsoft. For example, image meta-data could be stripped with features already available in Office.

Other gaps in Inspect Document would be harder to cover but possible with some effort. ‘Text behind images/shapes’ might be hard to find programmatically however Inspect Document could warn users that there are multiple layers which might hide content.

Why you must use the Document Inspector

Cropping an image only hides the edge elements, they aren’t really removed.

To remove cropped parts of an image go to Picture Tools | Format | Compress choose ‘Delete cropped areas of pictures’.  UNcheck ‘Apply only to this picture’ to ensure all images are protected. 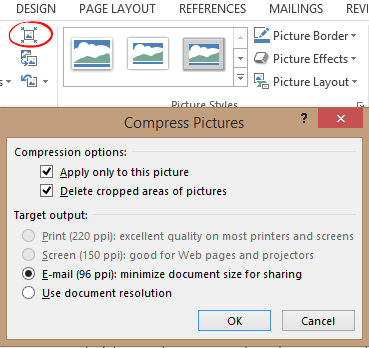 Any image added into a document includes a lot of additional or ‘meta-data’ about the image. The entire image file is copied into the Office document including file name and meta-data.

Inspect Document does nothing to remove all that image data. See Image privacy breach in Microsoft Office

The GPS position data is a notable privacy breach. Plenty of people have disclosed their private address by sharing images, not realizing that what they see in the picture is hiding more detailed info.

The option above, Picture Tools | Format | Compress with a different image resolution should make Office overwrite images without any meta-data.

Text behind shapes or images

Word, Excel and PowerPoint can overlay images, shapes, charts and text boxes over other elements or text.

It’s possible to accidentally add an object over text you want to keep private. Inspect Document doesn’t warn about text hidden ‘under’ other objects.

Microsoft admit this lapse in Inspect Document, if you look carefully at the ‘Invisible Content’ notes.

“This does not include objects that are covered by other objects”

Don’t laugh, often it’s the obvious things that are overlooked

A few months ago, a US government department revealed a name they were (strangely) trying to keep secret. The ‘confidential’ name was in the name of the Word document!

Does a document name reveal your secrets?

The ‘highlighting’ option is often used as a reminder of details that need fixing or editing. Highlighting is easy to see as you’re scanning through a document.

There’s a good case for Inspect Document checking or warning about highlighted text, at least as an option.

Word has many features and there’s probably other ways to accidentally leave confidential details in a document.  If you know one, please let us know.