A badly managed switch to Office 365 made it hard for staff and passengers at London’s Victoria Station.  An uninstall message for Office 2010 appeared over the important platform display.

The Register reports that the platform status displays, not the main board were hard to read because an Office 365 update notice kept appearing. 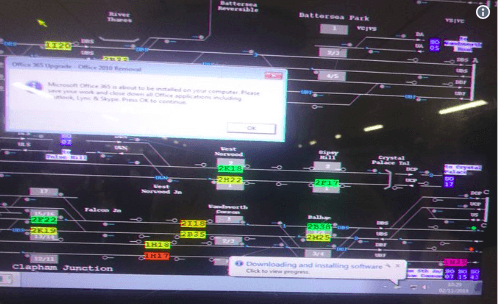 Source: Rob Dyke via The Register

Savvy UK train passengers know to look for this screen because it shows the detailed status of lines and platforms at the large station.  The screen is intended for staff but it’s usually visible to the public.

It seems Network Rail is updating to Office 365 and pushed out a automated upgrade script which didn’t quite work as they intended.  In this case, asking for the OK to uninstall Office 2010.  Possibly there’s an Office program running in the background, stopping the ‘silent’ switchover?

Thanks for joining us! You'll get a welcome message in a few moments.
Word gets a To-Do list ... at long last! Print part of a Word document