Outlook has three features called ‘Archive’ with the newer versions (Archive and Online Archive) much better than older ‘AutoArchive’.  We’ll explain the difference, how to use Archive and why to avoid AutoArchive. 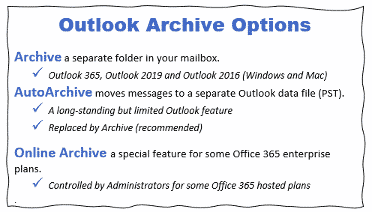 Each form of Archive sets aside older messages or emails you’ve finished with. It does that in two crucially different ways.

Whether you use Archive depends on how you like to arrange your Inbox. Some people like to have a ‘clean’ Inbox with completed messages moved to other folder. Others let messages accumulate in the Inbox where they can be searched easily and don’t use Archive at all.

There’s a lot of confusion online about Outlook archiving features. Plenty of well-meaning advice mixing up the older AutoArchive with the newer and simpler Archive feature.  Even Microsoft, at times, uses the term ‘Archive’ when they are talking about ‘AutoArchive’.

Despite the similar names and intentions of the two features, Archive and AutoArchive are quite different. Advice for one doesn’t apply to the other.

On Exchange Server, Outlook.com/Office 365 hosted mailboxes, Archive is a default folder much like Inbox and Sent Items.  For POP/IMAP accounts you can create an Archive folder and use it the same way.

Starting with Archive in Microsoft Outlook

Modern Archive keeps messages in the same mailbox and local Outlook PST/OST data file. The folder is usually synced automatically with the main/cloud server and available on any connected device.  It’s counted as part of your mailbox storage quota. There’s nothing special about the Outlook Archive folder. It’s just another folder that you can use to organize emails.

Starting with Archive in Microsoft Outlook

Admins can setup retention/archive policies for their business.  These policies can automatically move older messages to the archive storage.  Users can archive messages themselves or move messages back from the archive.

Office 365 customers have the interesting ‘auto-expanding archive’ option. When the users mailbox size limit is reached, additional space is automatically allocated to the archive.  This means the archive can never run out of space.

Administrators have most of the control with Online Archive and so the options available vary in each organization.  Check with your ‘Network Gods’ to see what’s possible in your organization.

Microsoft pushed Outlook’s AutoArchive for many years, because it solved a problem for the company.  Back then, Outlook users complained about slow response from the program and inability to handle larger PST/OST data files.

The company introduced AutoArchive which moved older messages to a separate PST file.  That sounded great but the extra PST could not be searched. Messages were often overlooked or totally lost!  It was a short-sighted solution.

Office-Watch.com has never recommended AutoArchive because of the problems it caused over time. Microsoft and its boosters would sometimes complain about that view. They’d insist that AutoArchive was an absolute good with no downside.  These days, Microsoft has done a ‘180’ turnabout and admits AutoArchive’s problems:

“ AutoArchive is an older Outlook feature that allows automatic moving of old mails to a .pst file. This means that the messages are removed from the server and are harder to find through search. If the hard drive that contains the AutoArchive.pst becomes unusable, these messages are lost.”

Thanks for joining us! You'll get a welcome message in a few moments.
Line Ends on Dashed Picture Borders in Word and PowerPoint Manually moving Outlook messages to Archive