Add the Australian Flag into Word, Excel or PowerPoint

Find and add the Australian National flag, Aboriginal flag and other Aussie ensigns into Office documents, Word, Excel or PowerPoint, then use some Office picture tools to enhance the image.

The same help can be used for any other national flag, just look for a different source.

Get the Australian Flag Image

There are many, many copies of the Australian flag available. We’ve opted for the Wikipedia site because it has an SVG scalable version (preferred) and PNG versions for older MS Office and other programs.

SVG graphics are supported by Office 365 and Office 2019. They maintain high quality regardless of resizing.

Go to https://commons.wikimedia.org/wiki/File:Flag_of_Australia.svg .  Below the image are a choice of images to download – right-click and choose ‘Save link as…’ (or similar depending on browser).

Otherwise choose one of the ‘PNG preview’ options. Select a resolution larger than what you’ll need in your document.

An alternative source is the Office image search at Insert | Online pictures.  It gives you many variations to choose from, though not necessarily the current version of the flag. The first image (top left) is from Wikipedia but it’s not the preferred SVG graphic.

The specific colours in the flag are useful to know when designing a document, worksheet or slide. Use these settings for complementary or contrasting design elements. These are the RGB and Web Hex colour codes.

Most of the protocols around use of the Australian flag apply only to flying a physical flag, not using a representation of it in other contexts. You are even allowed to use it for commercial purposes without permission, as long as you follow some guidelines:

For more information and advice about commercial use of the flag, refer to the Department of Prime Minister and Cabinet. They also have some downloadable Australian flag images and template files that you can use. The vector version is EPS, so the Wikipedia SVG is better for Office and web uses. Design nerds might be interested in the flag template which has the exact specs to recreate the flag.

The strong and striking Aboriginal Flag is both copyright (Harold Thomas the designer) and is listed under the Australian Flags Act. It has the same legal protections as the Aussie National Flag but, unlike the National Flag, can’t be used commercially without permission.

Like the National Flag, there’s a good SVG version on Wikipedia with PNG versions also available.

RGB and Web colour codes are:

We turn again to Wikipedia for a good list of Australian ceremonial flags including state and territory flags, military ensigns, cities and towns etc.

Once the flag image is saved to your computer, it’s the usual process to insert into a document.  Go to Insert | Pictures, and choose the image you just downloaded.

In Office, you can resize and position the image just like any other.

Some of the Graphics Effects like Shadow, Reflection and Bevel add a little visual interest without distorting the flag to a level that might offend.

For a nice little shadow effect, try Graphics Effects | Shadow | Outer which adds a little ‘shadow’ to the right and bottom of the image.

Reflection is another way to add a little effect to an image. 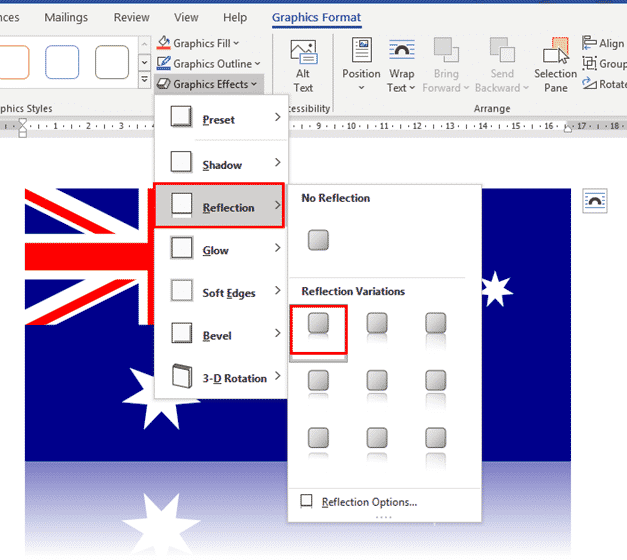 Soft edges is another choice.

Beyond these choices there are many more available, especially if you’re using an SVG. Graphics Fill or Graphics Outline can change the colours of an image.

Add the US Flag into Word, Excel or PowerPoint