Quickly insert symbols, characters and emoji in Microsoft Word without taking your fingers off the keyboard.

Inserting Symbols into Word documents is a pain, go up to the ribbon Insert | Symbols | Symbol which takes time … or you can use a trick from the 20th century to keep your fingers on the keyboard.

Type in the hexadecimal Unicode value of the symbol you want, then press Alt + X – the value will be changed to the Symbol automatically.

No one expects you to remember all the hex codes, after all there are over 40,000 of them in Unicode. Just remember the ones you need to most.

The British Pound Sterling symbol £ isn’t on a lot of keyboards even in the former colonies but if you need it, just type A3 then Alt + X.

Here’s a few common Alt + X shortcuts plus others we are often asked about with their shortcuts that are baked into Office itself. 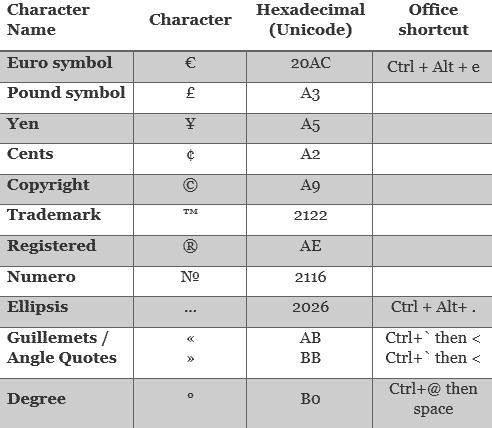 Another option is to make an AutoCorrect shortcut but that requires setup on each computer you use.  Learning the Alt + X shortcuts you need will work on any copy of Microsoft Word without any setup or configuration.

Word and Outlook only

Such a useful shortcut, you’d think it would work in Excel and PowerPoint too.

But not.  For reasons passing understanding this incredibly useful feature is only in Word for Windows and Outlook (which uses Word as the email editor).

And it’s only in Word/Outlook for Windows.

Word for Mac should support Alt + X (or a similar key combo).  While MacOS does have other and better symbol entry features, Alt + X should be in Office for Mac.  It would be more consistent and help people who switch between the two main Office programs (Windows and Mac).

Word Online?   What about the browser based version of Word?  No help there either.  And Alt + X would be especially useful in Word Online because the Insert | Symbol feature is very limited.

Windows 10 has (finally) an Emoji Panel which also inserts symbols .

Thanks for joining us! You'll get a welcome message in a few moments.
Get the Metropolitan Opera’s daily streaming performances Stop copying of your signature as a picture