The late and much missed musician Prince wished to be known by single character symbol called ‘Love Symbol Number 2’. Here’s how to enter that unique symbol in Word, PowerPoint or Microsoft Office generally.

There are various methods suggested on the Internet, we’ve narrowed then down to one excellent option (SVG graphic) two others that are OK if necessary (image or font symbol).

We’ve already shown how to get the ‘official’ Prince Purple color in Word, Excel and PowerPoint.

Office 365 for Windows or Mac supports SVG graphics though Microsoft mostly calls them ‘Icons’.  That’s great because vector-based SVG can be resized and recolored without loss of quality.

Love Symbol Number 2 as an SVG is available from Wikipedia. Download the SVG file not the PNG versions. 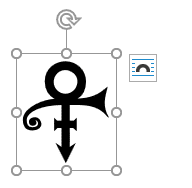 An SVG can be recolored from the Graphics Tools ribbon

And resized to any enormous size you like, even a whole page, with no loss of quality.

Use an image of the Prince Symbol

If your Office version doesn’t support SVG the next best option are the PNG versions of Love Symbol Number 2 from Wikipedia.

Choose the image size that’s closest but larger than your needs. It’s better to make an image smaller than enlarge a small image.

Recoloring an image can be done from Format | Color | More Variations then choose a color or custom color.

Get the ‘official’ font

Mike Wehner did a great service by unearthing and converting the original, official Love Symbol Number 2 font from a Prince game.  It’s available from his Dropbox as a TrueType font for Windows or Mac.

The Prince Logo font appears in the Word/Office font list under ‘Prince’.

Type a capital S to get Love Symbol Number 2 with the Prince font.

In Word 365 for Mac the symbol from the font looks great.

We’ve tried various font and paragraph options, but no luck. Not sure if this is a Word 365 issue, a problem with the font or a bug caused by the relative positions of the sun and moon <sigh>.

Like any other font letter or symbol, you can choose another color.

Thanks for joining us! You'll get a welcome message in a few moments.
Print part of a Word document Replacing text or separators in selected Excel cells
View our latest eBooks!