Office 365 ‘Save as Picture’ is nothing new

A ‘new’ Office 365 feature is ‘Save As Picture’ to save Office objects like shapes, icons, images and charts as a picture.  It also comes with a mystery because this ‘new’ feature isn’t new at all in Office 365 and Office 2019.

It’s a useful little trick, right-click on any Word, Excel or PowerPoint object and there’s a ‘Save as Picture’ option.

That’s useful though there have been other ways to do the same thing for many years. 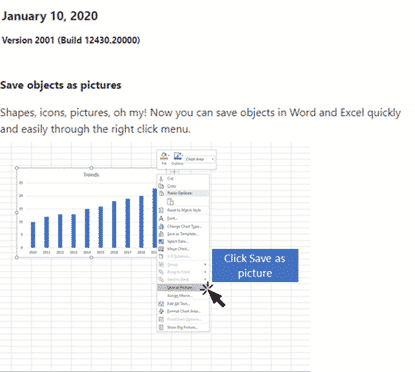 We fired up a recent public release (Office 365 version 1912) and ‘Save As Picture’ already there!

Not only that, it’s available in PowerPoint as well as Word and Excel.

Maybe there’s something new but it’s not obvious.  The picture formats haven’t changed. PNG is the default with other bitmap options available; JPEG, GIF, TIF and BMP.

‘Save As Picture’ for images in Office documents has possible since Office 2010.  It’s especially useful for saving images arriving in Outlook emails.

The change in Office 365/2019 was saving images from other Office objects like shapes, icons and charts.

Go ahead and use ‘Save As Picture’ in Office 365 or Office 2019 but not under the impression it’s anything new.

It’s possible there’s something changed in ‘Save As Picture’ which isn’t obvious.  Or a changed feature didn’t make it to the released build (which doesn’t explain the listing). Or someone at Microsoft is trying to pass off an existing feature as something new (childish and foolish but not unprecedented).

We’ve asked Microsoft to explain and, in the unlikely event they respond, we’ll let you know.

Save images or slides to SVG format

« Is my Office .MSI or Click to Run » Office 365 forces switch to Bing on Chrome browser