Meeting or party invitations don’t have to be plain, old white background emails, go for something a little more fancy or useful.

Officially, Microsoft suggests using their Stationery themes to change the look of an email. But that’s not available for invitation emails.  There are some formatting choices also missing from invitation emails.

Whenever formatting emails keep in mind compatibility.  While the email might look OK on the senders computer, these emails can look awful or unreadable on other software or web-based emails.

We prefer to keep things simple selecting a light colored background.  However, there’s a curious omission from the Meeting message window – there’s no Page Color option!  It’s not on the ribbon nor in the All Commands list to be added to the Quick Access Toolbar.  Compare that with the standard email message ribbon Options tab. 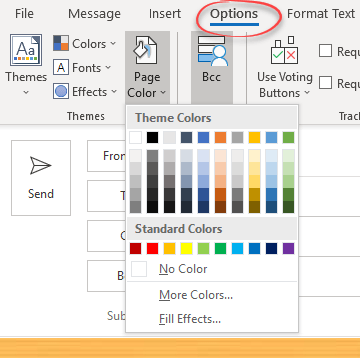 There are options to select a font, colors etc but not the background.  It’s seems deliberate but why?

The workaround is making a table with a 100% width to fill the entire message.  Change the table settings to a background fill color of your choice.

For special emails it’s tempting to choose a fancy font but that’s a trap.  Any font you choose has to be supported on the readers computer or device, otherwise the results can be very strange.  Better to stick with commonly used fonts which are present on most devices or have a similar font to substitute.

It’s a similar issue with Emoji.  As we’ve explained before, the same emoji code can look very different on other computers.  Here’s three standard emoji with their very different looks.

Instead of emoji via fonts (like Segoe UI Emoji ) use small pictures or Icons for greatest compatibility.

With some colored text, a simple invitation can be made in minutes.  This is the body of the email message / invitation.

The maps link is a useful convenience for all, paste from the Share link in Google or Bing Maps.

Thanks for subscribing!
Send party invitations from Outlook Is it safe to use Icons / SVG in Outlook emails?
View our latest eBooks!