Microsoft unleashed the dread Clippy, then quickly buried the paperclip back where it belongs.

For a short time, a version of the infamous Clippit paperclip (better known as Clippy) reappeared.  It was added as an option for Microsoft Teams service then quickly withdrawn.

It all started with a leak by the reliable WalkingCat who posted a link to a Github site with Clippy for Teams.

‘Helpful paperclip’?  Clippy has been called many things, but never ‘helpful’.

Nerds and geeks got overly excited about Microsoft apparently reviving Clippy only to have their hopes dashed when the project was removed from GitHub.

We’ve met young people who joke about Clippy even though they weren’t out of nappies when the paperclip infested screens in 1997. 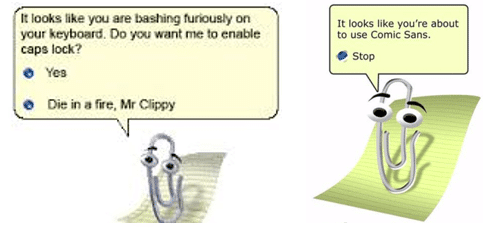 If Clippy appears in Microsoft Teams

If the project reappears, there’ll be little to get excited or concerned about. What Microsoft’s done is add a Clippy component to the extras that administrators can install into Teams.

Unlike the original Clippy, the Teams add-in is optional.  If a deranged and cruel Teams admin want to annoy Teams members, they can add Clippy.

There should be more control over Clippy than the stupid paperclip had back in Office 97.

And that fixes the main problem with Clippy in Office 97 … inability to easily control its existence on your computer screen.

Bring back the 90’s with online WordArt