Sketchy line option in Office for Windows and Mac

Office for Windows/Mac is getting three new outline styles for the borders of shapes and text boxes. Microsoft calls these lines ‘Sketchy’ because they have a hand-drawn line look.

It’s a nice little addition to Word, Excel, Powerpoint and Outlook. Let’s see how it works plus some details and limitations that Microsoft hasn’t mentioned.

All the existing outline options are straight and formal.  Sketchy gives some lighter, less strict options.

Sketchy Shapes are being promoted to mark a draft or ‘work in progress’ diagram.  Later the ‘sketchy’ lines are converted to straight lines with a few clicks.

There are three Sketchy outline options with increasing wobbliness: Curved, Freehand and Scribble.

They are available most places, but not all, you already see Outline options including the Shape Outline drop-down list and the Shape Format pane (via More Lines …)

Sometimes Sketchy is greyed out or not on the menu, as we’ll see later.

Combine any of the Sketchy options with the dots, dashes, color and weight (line thickness) choices: 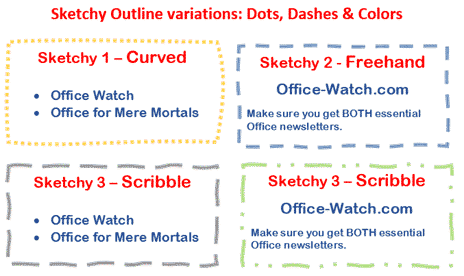 These borders are being called ‘Sketchy Shapes’ but they don’t just apply to shapes but also text boxes in Word, Excel, PowerPoint and Outlook.

With a few extra steps, Icons and SVG graphics can also get the Sketchy look.

Anything that can be converted into an Office shape, like an image or Icon can then get the Sketchy look.

Not all choices under Insert | Shapes support Sketchy lines. Lines and single line arrows do NOT support Sketchy. This could be a temporary Insider thing to be fixed before public release.

Microsoft’s workaround is to draw a Freeform line then apply Sketchy to it.

That’s OK if you can draw a fairly straight line on the screen at all!

The workaround does not solve the strange omission of line arrows from Sketchy.

Most Shapes are supported including Freeform Shape and Freeform Line which are grouped under Lines with other non-sketchy shapes.

Sketchy lines are NOT available as a border line style either for paragraph or page borders … at least not yet. It would seem to be a simple and obvious extension of sketchy lines.

Sketchy as a Shape Default

A Sketchy line style can be set at the default in the same way as any shape can become the default for new shapes.